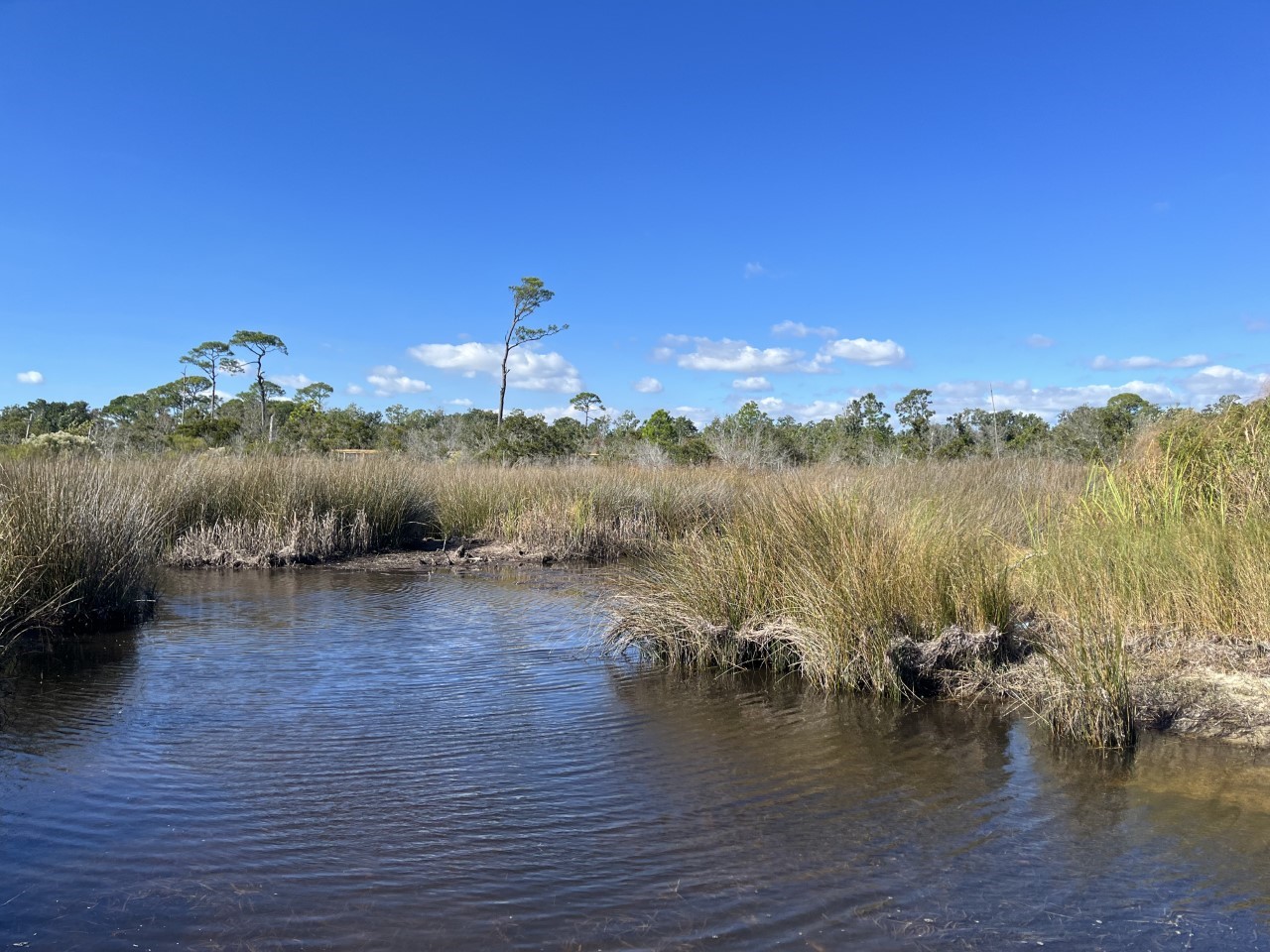 This month will feature another fish whose coloration matches the season, at least among the males. The Marsh Killifish is a small fish species with a maximum size of about 3-4 inches. They exhibit what is known as sexual dimorphism, or a clear, distinguishable difference in the external appearance of males and females. The females are typically drab in their coloration. They are shades of gray to brown with some darker brown to black mottling and bands (vertical bars) and a dark spot towards the rear of the dorsal fin (the fin found on the top of a fish) (Fig. 1). On the other hand, males can be much more vivid in their coloration. Male Marsh Killifish have the same gray to brown background of the females with some dark vertical bands, but their mottling (and sometime bands) is iridescent white, yellow, or orange and reminiscent of twinkling lights. The dorsal (top), anal (bottom), and caudal (tail) fins are also yellow to orange in hue, and the males lack the black dorsal fin spot commonly seen in females (Fig. 2). The iridescence and yellow to orange hue of the fins is greatly enhanced when males are actively courting females (Fig. 3). But beyond their flashy appearance, why do we care about Marsh Killifish? They are an important link in food webs (who eats who and how that food energy moves through the whole system) of estuaries in the southeastern US. They spend their whole lives in estuaries from Texas through the Gulf coast states and into the mid-Atlantic region (Chesapeake Bay area). Here they feed on small aquatic and terrestrial invertebrates (insect larvae, insects that fall into the water, worms, small crustaceans, etc.) and serve as a food source for many juvenile and sportfish (such as Red Drum, Gulf Flounder, and Common Snook) and wading birds (such as Snowy Egret, Great Blue Heron, and Reddish Egret). This links nutrients that came from the land to the wider estuarine ecosystem. Marsh Killifish are also viewed as what’s known as an indicator species. An indicator species is some type of organism that “indicates” a particular condition. For example, some microscopic aquatic organisms are linked to excess nutrients in a water body while others may indicate more ideal or pristine conditions. Marsh Killifish typically indicate an intact healthy upper estuarine system when they are found in relatively large numbers. The Marsh Killifish is just one member of a number of estuarine species from the Family Fundulidae (Killifish and Topminnows). Most of the other common estuary members of this family, such as the Gulf Killifish (aka Mud Minnow or Bull Minnow for the anglers out there) and Longnose Killifish (aka Mud Minnow or Tiger Minnow for the anglers), are found more broadly in estuaries, from the backwaters to open shorelines, and often in more disturbed or altered habitats. Marsh Killifish, on the other hand, are found almost entirely in the upper reaches of small tidal creeks, ponds, and lagoons where there is a clear connection to both the land and the wider estuary and abundant emergent (growing out of the water) shoreline vegetation, such as mangroves and salt marsh grasses (Fig. 4). 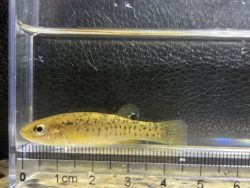 Fig. 1: Female Marsh Killifish are typically a gray to brown coloration with darker brown to black bars and mottling and a distinct dark spot at the rear of the dorsal fin (Photo credit Geoffrey Smith). 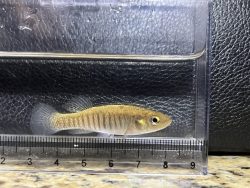 Fig. 2: Male Marsh Killifish are typically a gray to brown coloration with dark gray to black bars and iridescent mottling on the rear half of the body (Photo credit Geoffrey Smith).

Fig. 3: The coloration of male Marsh Killifish is greatly enhanced when they are actively courting females. On the left is a male showing greater iridescence, this would become even brighter and the fins would be bright yellow while this fish was courting a female (Photo credit Geoffrey Smith). On the right is a male with some visible iridescence and bright orange fins (Photo credit Florida Fish and Wildlife Conservation Commission). 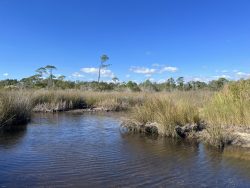 Fig. 4: Typical habitat of the Marsh Killifish consists of shallow backwater tidal creeks, ponds, and lagoons with abundant emergent vegetation, such as the Smooth Cordgrass and Black Needlerush seen in this photo (Photo Credit: Amanda Croteau).